How To Purchase A Shared Hosting Account On Downtown Host 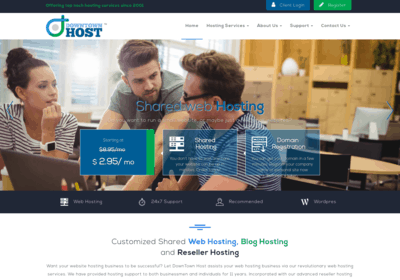 Video transcript:
[Hey everybody James here from all American Guardian dot com. Today’s going to be a really quick video I’m just going to show you how to sign up with one of the recommended hosting companies that I recommended in a previous video. I talked about Downtown Host and I also talked about InMotion Hosting. Downtown host as the one that I said was pretty much the lesser of the two as far as price goes. And also it’ll let you pay monthly versus having to pay for a full year in advance. Now they do offer a discount for paying a year two years or three years in advance. But like I said in the previous video I would recommend that you just pay monthly for now until you establish a relationship with that hosting company because you never know how things are going to work out and you don’t want to pay for a year or two years or even three years in advance and then start running into problems where you’re not getting the support you need from the hosting company. Your website’s going down. Things are running really slow and you become unhappy and then you want to leave and you trying to get your money back that you paid in advance. That may or may not give you that money back. So I always say when you’re first starting out just find a good reputable hosting company that is not too expensive that you can afford to pay monthly so that you don’t have too much invested in it until you have that established early relationship with the hosting company.

So of InMotion Hosting and Downtown Host I recommend to do that with downtown host. If you can afford to pay a little bit more. Starting out you can go ahead and go with in motion hosting. I think they have a little bit better support because they have 24 hour chat where downtown host they are great service but you may have to wait an hour or two hours. I mean sometimes it’s minutes but oftentimes you have to wait a few hours to get a response from them. They always do respond though and they always do help me fix any problems that I’ve had. They are a reputable company, have been using them for probably 7, 8, 9 years now I don’t even know exactly because time flies and all knows it’s been a long time and I’ve hosted many websites and many of my clients websites on their servers with no problems whatsoever. So real quick let’s go through this I’m on downtown post.com website here. You can search. Let’s see. Let me start right from Yang let’s just go to Google and search downtown host. And there it is right there. Click on that. OK. Now here is their shared web hosting as is which which is what you’re going to be doing. That’s just an Advertisement for it. So we’re going to go over here to hosting services dropped down. We’re going click on shared web hosting. That’s the Web hosting that you’re going to start out on. And right here we’ve got the starter package for four dollars and 95 cents. We’re going to click on sign up. Well let me show you these prices real quick.

The three year price if you pay three years in advance is only $2.95 two years in advance is three dollars and 50 cents per month is what it comes out to when you do the math when your advance comes out of $3.95. We’re going to just go with this monthly charge $4.95. But you’re only going to see this here you can’t even find these on anymore I’ve looked. If someone can search and find the page where this discount is listed I’ll give you a special prize. But I’ve searched and can’t find anymore. Back in the day when I first signed up with downtown host they actually had coupons readily available on their website that you could find very easily and apply lifetime discounts to all of these prices that are listed. So I’m going to give you that discount code today and it’s going to take 25 percent off your entire purchase. For the life of your account. I’m not guaranteeing that because like I said they don’t have it listed anymore but I’ve already tested it out. And it did take it off in the shopping cart. So I believe it still works. So please give it a try. I’m gonna show you. So we’re going to go to order now and right here is the starter package OK, $4.95 per month. We got order that now I’ve already showed you how to purchase the domain name so you just click on this bottom one that says I will use my existing domain and update my name servers. So the domain name that I purchased the other day was all American dot site because it was 88 cents.

Now you remember you’re going to use the dot com I only did the DOT site because I wanted to just show you for demonstration purposes. Use OK now right here we’ve got an option that says location Asia Europe USA central USA East Coast or West Coast. I typically go with us a center that’s going to be a data center based out of Dallas Texas. So I typically use that if you think all of your customers most of the people visiting your website are from L.A. then you may want to pick the West Coast names or West Coast data center if you know that most of your customers because your local business are in Washington D.C. or New York and you may want to pick an East Coast. But I’m in Houston Texas so that’s why I always pick the center one. If you’ve got a nationwide company and you’ve got visitors from all over you may want to go with the Center data center in Dallas Texas because your customers are going to be everywhere. So basically the where your files for your website are stored on that data center on those servers the location of that to the distance between that data center and your customer is going to make the difference in speed. So somebody located close to the data center is going to be served up those files a lot quicker somebody that lives on the opposite side of the country from that data center it’s going to take a little bit longer amount of time for that for those files to be served up. Oh that makes sense and I’m not confusing you.

But anyhow so typically I pick the center location over on the right. It does show that it’s $4.95 per month but it shows in seven dollars and ten cents due today. This is going to be different for everybody depending on what time of the month you sign up. Because what they do is they prorate the rest of the month that you’re purchasing and so like right now. Today’s the 17th of April it’s prorating the rest of April plus making me pay for the entire month of May. From that point on starting in June it will just be monthly. OK if you’re just an example if you are signing up today but we are going to put in a discount coupon that will a discount go that will take 25 percent off. So go ahead continue and actually I had already put the coupon code in so I guess it remembers that just because it’s cache it in my browser. But this is the coupon code you’re going in right here. Two 25 off OK just “25off” and you can see it right here. It’s taken off a dollar and 78 cents from my recurring price. So it’s actually going to drop that three or $4.95 down to, let’s see, let me do the math for you real quick here, $4.95 minus a dollar and 78 cents. It’s going to drop down to three dollars and 17 cents per month. I mean a reliable host and you can’t really get much cheaper than that paying monthly. So it’s a hell of a deal.

After that you’ve got to check out and you’re just going to enter and all your standard information here OK name email phone number your company name street address. You know if you’re a sole proprietor and you’re running a business from home you’re going to put your home address in here if you’ve got a P.O. box and you could put that seat. This is all pretty standard stuff passwords you need to write all this stuff down even though it’s going to email you the information you need to write this stuff down just to make sure that you have the password at least until you get used to logging into your hosting account and everything here. They’ve got multiple ways to pay PayPal Credit Debit pays that I have no idea what these are bitcoin. You’ve got bitcoin you can bet bitcoin. But typically I pay with PayPal or Credit Card and then obviously if you want to be on their mailing list to check no on this kind of stuff you’re going to check off that you’ve read the Terms and Conditions and complete the order. OK. That’s pretty much it for going to the purchasing. I will have another video or I’m going to show you how to actually connect your domain name to your hosting account. OK. There’s something called Name Servers and we’re going to point our doing name to the hosting account so that they’re basically connected. All right. So if you have any questions put them in the comments below. Make sure to take the bell icon and subscribe buttons that you’re notified of any new videos I put out. And I will see you on the next video. Thank you.] End of transcript.